THE BEST THINGS COME TO THOSE WHO ANTICIPATE

Here's a quote I came across recently by the managing director of Harrods, Michael Ward, who apparently said:
“What luxury is about is having the most beautiful experience,
that’s what people love.”
Do you agree? I think he’s only partly right. Because experiences, however beautiful, are also often fleeting, transient, gone in an instant.
Real luxury, I would argue, is about anticipating the most beautiful experience.
That’s because brain research now tells us that pleasure isn’t just experiential. It’s anticipatory. We know our brains have pleasure detectors. When we acquire an object of desire, or see a lover’s smile or taste a wonderful champagne, a rush of happy chemicals go sloshing through the brain.
But those happy chemicals also get released when we anticipate something we love. In fact we get a bigger rush from anticipating than we do from experiencing.
Scientists from the University Medical Centre in Hamburg recently conducted tests that measure brain activity and found that our brains experience more pleasure when we are working towards something than when we actually achieve it.
(So that's why makers of designer handbags create waiting lists)
That’s why luxury in the form of real quality brings lasting satisfaction, it’s why craftsmanship persists and why bling will only ever bring transient satisfaction, to the producer and to the consumer.
Science has proved that it’s anticipation that makes us happy, that long-termism always trumps short-termism and that a delayed reward brings more pleasure than an instant reward.
Interestingly the scientists found also discovered that regular hints about the upcoming reward can boost our feelings of pleasure, when people in the lab were reminded of something that was worth waiting for the pleasure centres in their brains lit up.
So if you have a special bottle of GH Mumm champagne tucked away for a special occasion, having a quick peek at it on regular occasions will be sure to boost your happiness levels.
Think about holidays too. We’re all supposed to love holidays.  Do you like planning a holiday, looking at images of tropical beaches, beautiful sunsets, sumptuous hotels, imagining a place where the sun always shines and you’ve left all your worries behind in Heathrow’s departure lounge?
Well researchers in the Netherlands recently showed that we get a larger boost in happiness from planning a holiday than we do from the holiday itself. They studied the happiness levels of over 1000 Dutch adults and found that happiness levels were highest when people were planning their holiday.
In fact they argue that if you really want holidays to make you happier you shouldn’t just have one long one, you should have lots of shorter ones so you maximise the time spent in anticipation.
Intuitively we all know this and evolutionary psychology accounts for why we’re drawn to products that embody this waiting process, that stand for timelessless and are characterised by tradition and craftsmanship.
Ironically though nowadays we are rarely encouraged to wait. We live in an immediate gratification society, instant messaging, fast food, ready credit and computer games where you can kill your enemies at the touch of a button.

Are we all going to lose the ability to delay our pleasures? During boom times that is always a risk but during a recession different types of processes operate. That’s when delayed gratification comes to the fore.
Because psychological research shows being able to delay gratification is a sign of higher cognitive ability, one that’s more recently evolved. A sign of maturity that’s even linked to quality of life.
You may have heard of the famous marshmallow test that an American psychologist called Walter Mischel carried out on children in the 1960’s. Mischel offered young children, around 3 and 4 years of age, a marshmallow. He put it in front of them and said they could eat it now OR if they could wait while he stepped out for a few minutes when he came back they could have two marshmallows.
Most children couldn’t wait. They either ate it as soon as he was out of the room or sat and squirmed for a while and then caved in and ate it. Some covered their eyes with their hands or turned their back on the marshmallow so that they can’t see it.
One girl stroked the marshmallow lovingly; another boy looked carefully around the room to make sure that nobody could see him then picked it up sucked it and put it back!
But about 30% of the children wrestled with temptation but stuck it out for a full fifteen minutes. They were ones who could delay gratification in return for a second marshmallow. Years later the experimenters followed up the children to adulthood.
The ones who could wait did better at school, were more successful in their careers and in their relationships.
The instant gratifiers, the ones who couldn’t wait, on the other hand were more likely to have behavioural problems at school, or problems at home.
The moral of this story is that waiting is a higher-cognitive skill, a sign of maturity and those who can delay gratification have a better quality of life.
More recently brain researchers have found the key to the link between delayed gratification and intelligence. Different parts of the brain get activated by immediate and delayed rewards.
The need for immediate reward is driven by the more primitive part of the brain – the part that might impel the purchaser towards quick fixes, impulse buys, bling and disposable luxury.
But when people choose longer term options they use the frontal-parietal part of the brain, that is situated in the more recently evolved pre-frontal cortex - the part that differentiates us from animals and from our ancestors – it gives us the ability to reason, to plan ahead and exercise self-control.
So delayed gratification and the ethic of the craftsman overlap and reinforce each other in that both require a certain construction of the future, a certain ideal of stability and longevity.
That’s why brands that are associated with longevity, with craftsmanship and tradition, will continue to have lasting appeal whatever the economic climate but especially when people want every penny they spend to have value.
So Michael Ward was only partly right when he said that luxury is having a beautiful experience, it’s more than that.
The best things come to those who anticipate….
This is the talk I gave to the G.H. Mumm Perrier-Jouet Champagne Assembly on 27th January. 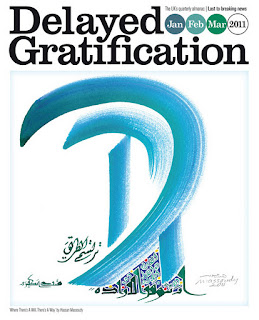 PS When researching this article I discovered there's even a magazine called Delayed Gratification. I thought it might be found right on the top shelf of the newsagents, or only published every other year, but it seems it's out quarterly and rather sensibly measures news in months not minutes. Like all good things in life it says it is beautiful, collectable and designed to be treasured.http://www.dgquarterly.com/
Posted by Karen Pine www.karenpine.com at 08:48