Cor, what a nerve! The indignation in the voices of the people answering the radio interviewer’s question was palpable:

What topic had Daniel Finkelstein probed them about for his programme Can Pay Will Pay?


That brazen broadcaster had the nerve, the sheer bare-faced gall to accost complete strangers - and ask them how much they earned.


The responses that could be broadcast consisted of polite but firm refusals.
Why is money such a great taboo?
Actually, as DF pointed out, it’s the great British taboo. A Polish girl was quite happy to reveal all and was shocked by the anal Brits’ secrecy over the size of their pay packets.
Here are 10 fascinating facts about people’s earnings that you always wanted to know but were afraid to ask:
So if you’re a short, ugly, right-handed, messy, heterosexual woman from an ethnic minority group your pay-prospects don’t look too good. But one consolation is you’ll probably hush up your low pay. Unless you’re Polish of course….


One research finding that might console the low paid is that you’ll only be unhappy about your low pay if you discover that someone is earning more. Relative earnings, rather than absolute earnings, are what make people happy, apparently. Perhaps that explains the pay-talk taboo. If someone else is earning more, we'd just rather not know thank you very much.

Posted by Karen Pine www.karenpine.com at 19:47 No comments:

Do Something Different with Money

When did you last Do Something Different? Let's face it, we’re all creatures of habit at heart. I know I feel I can’t start the day until I’ve had my tea in the morning. Earl grey. With soya milk. One sugar. In my Billy Childish mug. Then I can sort out my tasks for the day while I sip it.
Psychologists estimate that up to 90% of what we do and think every day is a repetition of what we’ve done before. That’s  because the brain operates on an efficiency principle. Why waste precious energy, it says, coming up with new ideas and re-inventing ways of doing things? Might as well bring out the old ones that we know and like.
No surprise then that when we're asked to come up with a decision or get something done, we act in a ‘here’s one I made earlier’ kind of way. Because fresh ideas take a huge effort. And new behaviours require that we knock ourselves off autopilot and get in the driving seat.
Do Something Different (DSD) is a powerful technique to change behaviour. It now underpins all the behaviour change work I get involved in and brings about some amazing transformations. Put simply, DSD works because to change we first have to become unstuck. Unstuck from our old ways. Unstuck from our usual habits.

That applies to financial behaviour too. Our attitude to money will have become ingrained over years and years. There will be areas of finance with which we’re comfortable (maybe managing the family budget or settling bills on time). Then, lurking deeper, those which are outside our comfort zone (perhaps dealing with taxation or pension issues).
Doing Something Different (DSD) is a way of dipping a toe into the discomfort zone of your finances. That’s why we have lots of DSD exercises in Sheconomics.
Here are just a few:
Scared or intimidated by financial jargon?
DSD and look at a website that demystifies the world of finance e.g. www.moneymadeclear.org.uk for just 10 minutes every day. Or make a habit of flicking through the financial pages of the weekend papers. Get comfortable with money talk and money facts. It's not rocket science, honest.
Held back by a contempt for money or feeling you don’t deserve it?
DSD and go somewhere that feels out of your league. Maybe have a coffee in a posh hotel, tell yourself you've every right to it.  Test drive a top-of-the-range car and see how it feels.
Head-in-the-sand and then hit by big expenses?
DSD and divert a sum via direct debit every month into an emergency fund. Folk who are financially savvy have at least enough stashed away to cover three month's living expenses. Then if a job-loss or big expense hits, there's less chance you'll dive into debt to deal with it.
Trapped by salary creep (earn more-spend more)
DSD and pretend you didn’t get your next pay rise- divert the difference into a savings account. Use the human habitual tendency to your advantage and automate savings and funds. You won't miss what you haven't had and it'll grow without you doing anything.
Living for today and ignoring the future?
DSD and get a current value on what your pension will bring you. That's all, just call up your provider and ask for the estimated annual amount payable. Divide it by 52. Then try living on that amount for a week. How does it feel? When you've recovered from the shock go and talk to an expert about how you can boost your pension.
Overwhelmed by the financial tasks left untackled?
DSD and organise your paperwork into neat orderly files. You’ll find you start feeling in control immediately. Those big problems won't seem anywhere near as overwhelming. 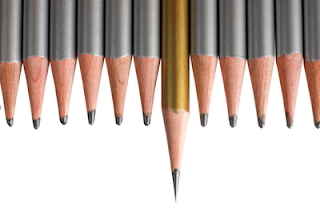 Whenever you're feeling stuck or that you're not getting what you want from life, just ask yourself 'What do I usually do?' Then try doing the opposite. As Einstein said, it's crazy to keep doing the same thing and expecting a different result. To get something different you have to do something different. That applies to your financial behaviour as well as to other areas of your life, like health, relationships or work.
The Do Something Different journal contains a hundred ways to DSD (see panel on the right). For a daily DSD you can follow it on twitter (http://twitter.com@DSDjournal).
Posted by Karen Pine www.karenpine.com at 13:37 2 comments:

Men are from Mars but sadly that doesn't make them all chocolate-flavoured.
Someone asked me again today about the differences between men and women. Money differences that is. It's not that women are worse than men with money. Just different. That's why we wrote Sheconomics in a female-friendly way.
We know that women have different money emotions to men. That many women find money boring. Scary even.
We try to cut through all this in Sheconomics. We even suggest that the high that comes from a good money workout is on a par with chocolate. Well nearly.
I thought I'd repeat the 8 most common mistakes that women make with money. These are the ones that come up time and again in our Sheconomics research.
Here are the mistakes and some advice about how to get over them - so you can feel smug about your money.
1. A misplaced sense of loyalty.
Whether it’s a mortgage, bank account or mobile phone contract, women are often reluctant to switch.
We say: Be loyal to your friends but as promiscuous as you like with financial providers. If they don't give good service, or good rates, it's OK to move on. You don't have to please them or be a loyal customer.


2. Fear of financial products.
Liking tangible investments, such as property, over stocks and shares can mean women miss out on money-making opportunities.
We say: It's not rocket science. Don't put up with people who over-complicate products and hide behind jargon. Insist on plain-speaking and straightforward explanations.


3. Being money martyrs. Putting the needs of others first. Helping out the young ones when we should be providing for our own financial future.
We say: OK, look after the children. But it doesn’t help anyone in the long run when women sacrifice their own needs for others. Develop a selfish streak.


4. Low self-belief. Not asking for money – pay rises/fee increases/better deals – often means women don’t get what they’re entitled to.
We say: Don't wait for someone to notice how hard-working you are. Tell them. Then ask them to pay you what you're worth.


5. Letting shopping become an emotional habit. OK, this is where women can out-do the men with a need for regular retail fixes.
We say: Shop because you need the goods, not because you need the buzz. Find other non-materialistic ways of getting your kicks. Do something different.


6. Not managing career break finance. Women lose out because taking time out to have kids often means they make fewer NI or pension contributions.
We say:  A career-break needn’t mean a pension break. If your partner’s salary can cover two pensions, it’ll ease the strain in later life. Having a family is a joint responsibility.


7. Allowing others to make the big financial decisions. Women are great at day-to-day budgeting but can sometimes suffer from decision paralysis when it comes to bigger financial decisions.
We say: Get involved in the decision-making and share the financial management. Why give someone else control over something as important as your finances?


8. Indulging in rescue fantasies. You know, the voice in your head that says "I'll just carry on like this, something will get sorted out."
We say: Don’t kid yourself. What if that someone doesn't come and save you? What if, when he does, he's got his own debts? Be a big girl and take control.


Posted by Karen Pine www.karenpine.com at 18:54 No comments: