Mind what you wear … because it could change your life.

We spend billions of pounds on clothes annually, so surely the cry 'I don’t know what to wear!’ should never be heard. Yet it is.

A wardrobe crisis may seem like a minor dilemma in a day packed with important decisions, but it's actually not frivolous. Because the clothes we choose can shape the day ahead, determining who we meet, how we behave and how others react to us. No wonder the psychology of fashion is so fascinating.

That’s why my new book ‘Mind What You Wear’ helps you understand the impact of what you wear, on yourself.

Because clothing can literally be life-changing.

The book includes the story of Meg who, on a whim, bought a hat, that made a man approach her at a party, that led to them marrying. It’s a poignant  reminder of how our apparently insignifcant choices have a huge impact on others. And where that can lead.

But the main focus of the book is on how what we wear changes us too.
We walk taller and act more confidently in the right outfit. When we’re dressed down we withdraw and hide away. Clothes speak to others but they have the power to speak to us too. Sensations and associations in the body lead to new ideas in the mind.

Every day we pull something from the wardrobe, or try on something in a store, that has life-changing potential.
- The suit that subliminally convinces an interviewer we’re perfect for the job.
- The red dress that stirs something in a future lover that leads them to ask for a date.
- Even the swimsuit that can strip us of our intellectual powers.
(Yes, when Barbara Fredrickson gave a maths test to groups of women and men who wore either a swimsuit or a sweater, she showed that wearing a swimsuit diminished a woman’s maths performance).

This was a startling discovery - that what we wear can actually change the way our brains function. Later, researchers from Northwestern University in the US showed that putting on a white coat improved a person’s mental agility. By associating the white coat with a doctor their brain was primed to take on different mental capacities.

So in my lab we have been putting students in Superman t-shirts! We’ve found it makes them see themselves as more likeable and superior to other students, and even to believe they are physically stronger. Every day the brain’s functions are primed by sights, smells and experiences. Now we know our mental processes can also primed by a piece of clothing, which opens up exciting opportunities.

What we wear has cognitive, social and emotional consequences.
The right clothing can change who we are, how we think and how we feel. So we should never underestimate this power. My research has revealed that when women are depressed they are more likely to wear jeans. What would happen if, on waking up feeling glum, instead of dragging on the sad pants the woman pulled on a favourite frock? The effect could be intrapersonal, priming her brain and lifting her mood. Or it could be interpersonal, the message her clothes send to the world determining others’ responses to her, triggering a positive feedback loop capable of changing her mood.

The book has lots of tips to lift your mood with the right clothes.
One day we may even see clothes prescribed as therapy, as an alternative to medication. In the meantime why not learn a little more about how the right clothes can impact on your life by getting hold of a copy of Mind What You Wear.

Posted by Karen Pine www.karenpine.com at 12:21 No comments:

Stuck in a Wardrobe Rut?

Released to coincide with her forthcoming book on the psychology of fashion, Mind What You Wear, (Amazon Singles, May 2014) the programme will give you the tools and guidance to experiment with new looks, refresh your image and reconnect with your true personal style.

More about the book Mind What You Wear
To join  Wear Something Different
Posted by Karen Pine www.karenpine.com at 10:39 No comments:

Self-acceptance could be the key to a happier life, yet it’s the happy habit many people practise the least.

Happiness is more than just a feeling; it is something we can all practise on a daily basis. But people are better at some ‘happy habits’ than others. In fact, the one habit that corresponds most closely with us being satisfied with our lives overall – self-acceptance – is often the one we practise least.

5,000 people surveyed by the charity Action for Happiness, in collaboration with Do Something Different, rated themselves between 1 and 10 on ten habits identified  as being key to happiness. 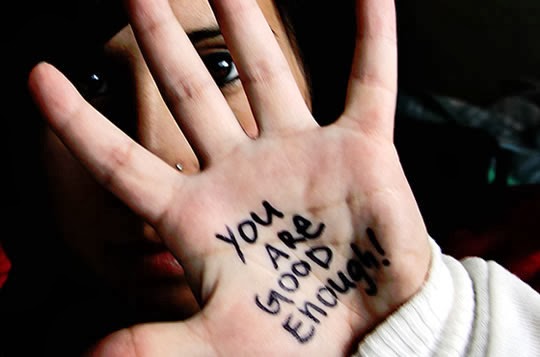 How often are you kind to yourself and think you’re fine as you are?
When answering this Acceptance question, people’s average rating was just 5.56 out of 10. Only 5% of people put themselves happily at a 10 on the Acceptance habit and almost half (46%) of people rated themselves at 5 or less. There's some work to be done there (tips below).

How often do you make an effort to help or be kind to others?
Giving was the top habit revealed by those who took the survey. When asked the question above people scored an average of 7.41 out of 10, with a generous one in six (17%) topping 10 out of 10. Just over one in three (36%) people scored 8 or 9; slightly fewer (32%) scored 6 or 7; and less than one in six (15%) rated themselves at 5 or less.
How often do you put effort into the relationships that matter most to you?
The Relating habit came a close second. The question above about how well we maintain and nurture our close relationships produced an average score of 7.36 out of 10.
And a lovely 15% of people scored the maximum 10 out of 10! 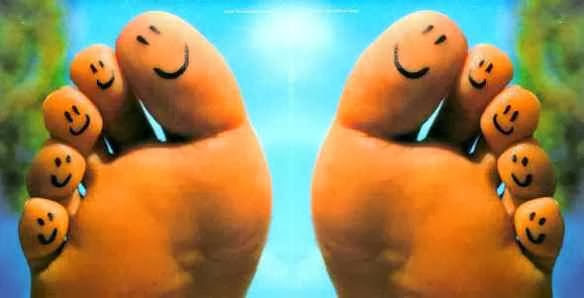 Overall how satisfied are you with your life?
The survey also revealed which habits are most closely related to people’s overall satisfaction with life. All 10 habits were found to be strongly linked to life satisfaction, with Acceptance found to be the habit that predicts it most strongly. Yet Acceptance was also revealed as the habit that people tend to practise the least, generating the lowest average score from the 5,000 respondents.

How often do you spend at least half an hour a day being active?
Treating our bodies to regular physical activity is another proven happy habit. Yet the survey revealed that this is another habit that we don't all get round to practising. The average answer to the exercise question above was just 5.88 out of 10, with 45% of couch-huggers rating themselves 5 or less. 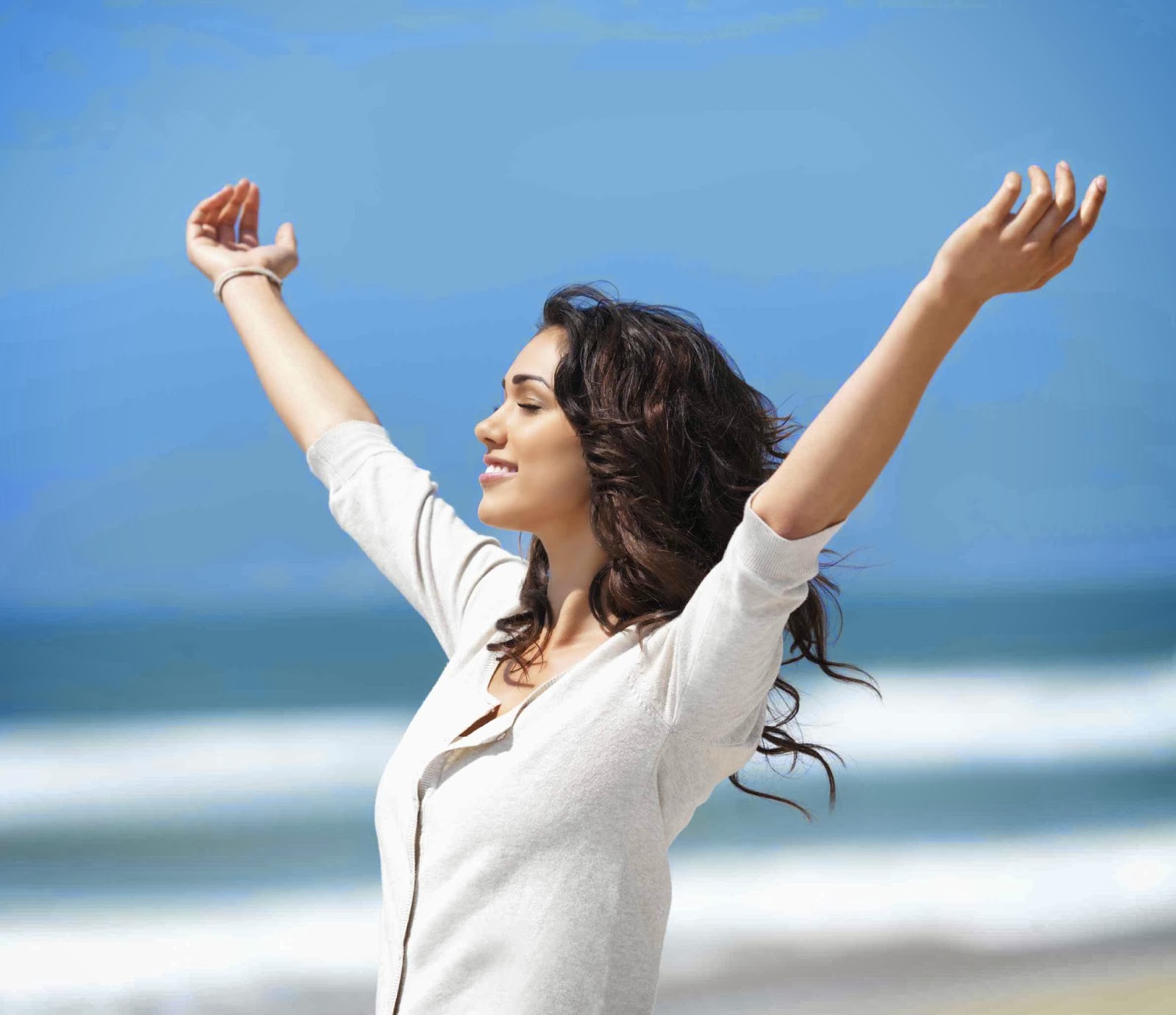 If you want to boost your happy habits check out the new Do Happiness programme. It costs just £15 for a profile and regular small positive actions (Do’s) by text and email, customised so you can practice your happy habits daily. 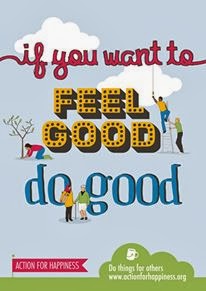 And signing up will be your first act of Giving because, for each programme sold Do Something Different, gives one away free to someone who can't afford it.


How to practise the self-acceptance habit.

Here are three positive actions that people can take to increase their levels of self-acceptance:
·      Be as kind to yourself as you are to others. See your mistakes as opportunities to learn. Notice things you do well, however small
·      Ask a trusted friend or colleague to tell you what your strengths are or what they value about you
·      Spend some quiet time by yourself. Tune in to how you're feeling inside and try to be at peace with who you are.

Where did the happy habits come from? 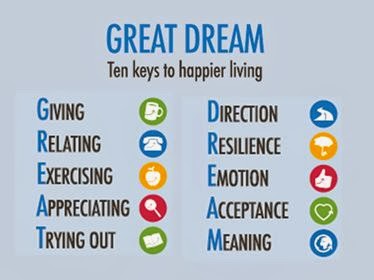 The happy habits included in the survey are based on the Ten Keys to Happier Living framework, developed by Action for Happiness based on an extensive review of the latest research about what really affects mental wellbeing. Together the Ten Keys spell the acronym GREAT DREAM, as follows:

Don't forget if you're feeling like you've let your happy habits slip, you can still get them back and turn your life around. Check out http:dsd.me/dohappiness

How do we change if we’re hard-wired for habits?

“The brain is a habit machine” one of the founders of Do Something Different, Professor Ben Fletcher, often tells us, before going on to remind us how recent scientific discoveries have changed views about the adult brain.
For many years it was thought the brain was fixed and immutable, that it was incapable of restructuring itself. Then, in the early twentieth century, evidence emerged showing that the brain is more malleable than ever thought possible. It can and does change.

Novel stimuli cause the brain to create new neural pathways or reorganize existing ones.

We’re talking here about the principle of neuroplasticity. It is now recognised that the brain is constantly changing in response to new experiences, new behaviors and different environments. Novel stimuli cause the brain to create new neural pathways or reorganize existing ones, fundamentally altering how behaviour is created and how information is processed.

A ground-breaking study into neuroplasticity involved scanning the brains of London taxi drivers (Maguire et al., 2000). Typically, a London taxi driver spends around two years studying the complex layout of the city and its myriad of streets. This long, rigorous period of training causes structural changes in the taxi drivers’ brains. When their brains were exposed to fMRI scanning, the taxi drivers’  hippocampuses were found to be significantly larger than those of a control group of 50 healthy men. The hippocampus is the brain area involved in memory and navigation. And the longer the time spent as a taxi driver the larger it was.

Repetition of an activity (in other words, habits) results in the brain falling back on the same set of existing neural pathways.

Further examples of brain neuroplasticity are less dramatic, but they demonstrate the same principle. They have shown that some activities impact the brain more than others (Mechelli et al., 2004; Gaser and Schlaug, 2003; Draganski et al., 2006) and that repetition of an activity (in other words, habits) results in the brain falling back on the same set of existing neural pathways. Therefore, to continue changing, the brain must be challenged to work in new ways. It must be exposed to novel experiences and new behaviours.

To continue changing, the brain must be challenged to work in new ways. It must be exposed to novel experiences and new behaviours.

DoSomething Different draws on this idea, by helping everyone on our programmes to create experiences that challenge their existing habits. Because brain science also tells us that experiences change the brain, not thoughts. It’s about acting, not thinking.

The Do’s we create tackle the individual’s habitual ways of behaving and responding. Doing something different exposes the person to regular, novel experiences. This reduces the likelihood of the brain falling back on old neural pathways. Not only does this mean that life gets better, it also means old maladaptive behaviours – overeating, excessive drinking, bias, stress - are less likely to get repeated. This is behaviour change in action, one Do at a time.

This is a copy of a blog I (Karen) wrote for the Do Something Different website over at http://dsd.me. Many of the principles discussed here apply to people's money habits too!

Posted by Karen Pine www.karenpine.com at 13:33 No comments: