"There should never be too much testosterone in one room"

Why Christine Lagarde should be president of the IMF

1.     For saying “I honestly think that there should never be too much testosterone in one room."
2.     Because she speaks fluent French. OK she is French. But she also speaks fluent English. How brilliant is that?

3.     For being ballsy enough to state that “Gender-dominated environments are not good... particularly in the financial sector where there are too few women,"

4.     She says this about cooking: “Cooking is about giving”. Don’t you just love that?

5.     And for saying: "In gender-dominated environments, men have a tendency to... show how hairy chested they are, compared with the man who's sitting next to them.” 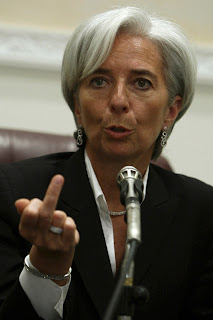 6.      And also for saying the 2008 financial collapse was driven by the aggressive, greedy, testosterone-fuelled mood of male-dominated, hi-tech trading rooms.

7.     For being hugely ambitious but wanting to spend more time cooking for her family or making apricot and quince jam. (That’s not strawberry or raspberry jam. It’s bloody apricot and quince I tell you.)
8.     For being reluctant to say there are female and male ways of dealing with power… “but based on my own experience, women will tend to be inclusive, to reach out more, to care a little more."
9.     A man said about her "Her lightning-quick wit, genuine warmth and ability to bridge divides while remaining fiercely loyal to French interests have been a source of admiration."
(Timothy Geithner, US Secretary of the Treasury, Time, April 2009)
10.   Hotel chambermaids can feel totally safe in her presence.
Posted by Karen Pine www.karenpine.com at 19:12

Email ThisBlogThis!Share to TwitterShare to FacebookShare to Pinterest
Labels: boards, men and women