Boards are a bit like dinner parties.
That’s what I told a group of company secretaries from FTSE 100 companies yesterday, when I was invited to speak at a seminar organised by Capita Registrars. The topic was women on boards, based on a paper I have just had published in Significance, the Journal of the Royal Statistical Society.
I was thinking about a dinner party I gave on Saturday night. Apart from the fact that it was exhausting (I seemed to spend most of Saturday slow-roasting a tomato) I was mindful of a statistic I’d come across in a recent survey. It said:
1 in 10 people would rather go to the dentist than go to a dinner party.
Perhaps they’d been to one of mine.

In fact the evening hummed along nicely, with Mike and Barbara, a lovely couple from work. My friend Jayne who’s a life coach and her husband Neil who works for a charity. Then there was my Geoff, who’s an antiques dealer and his wife Julianne. She’s a counsellor.
The evening was fine. Probably because we’re all quite similar. We share the same values and beliefs. We all prefer Sauvignon blanc to Chardonnay and agree on where to buy the  best Parmiggiano Reggiano in London (at Camisa’s in Old Compton Street).
In short, we’re very comfortable in each other’s presence because we’re all white, middle-class, heterosexual baby-boomers from St Albans.
Not surprising that we all found ourselves around the same table. Psychological studies show that we seek out people who are like ourselves. Research from the University of Chicago even shows we are more likely to fall in love with someone who looks like us. At a social level, hanging out with like-minded people means we can affirm our own beliefs and values. We can confirm that we’re right in what we think.
But it does mean, if we’re not careful, that the conversation revolves around the topics we all know and care about. We’re in our comfort zone – sharing common ground with people who think like us.
But it’s when we do something different and put ourselves in the discomfort zone that growth and development happens.
I asked myself after Saturday night whether I should have invited a more mixed group. Why, for example, didn’t I invite my neighbour’s son who’s an aspiring poet and unemployed? Or the lovely Indian couple I see every week at Tai Chi?
How on earth am I going to have my own values challenged, and see the world as it is for other people, if I only hang out with like-minded people who are clones of myself?
BOARDS
I think the same is true of boards. They’re a bit like dinner parties (except no-one’s had to slow roast a tomato and probably a little less Sauvignon Blanc gets consumed)….but they tend to recruit members who are just like them. 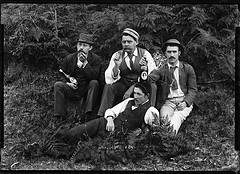 About ten years ago the Norwegian Trade and Industry manager, Asnager Gabrielsen noted that boards were mostly made up of men with very similar views and backgrounds who went hunting and fishing together.
This meant there was a huge risk of group-think in the boards’ decision-making processes, and a real lack of diverse perspectives.
Norway brought in laws stating that board membership should be at least 40% female.
Since then Norway has enjoyed 3% economic growth and an 11% budget surplus, while many of its European neighbours were still in the depths of economic recession.
Some boards in the UK probably still resemble those that worried the Norwegians. To borrow a phrase from my friend Alan Newman, they are mostly male, pale and stale.
Let’s look at the stats:
Yet the evidence for women on the board boosting company performance is compelling (the recent Lord Davies report acknowledges this) even if you ignore the Norwegian example.
Whilst this is correlational data and doesn’t constitute causality, the evidence from multiple measures now shows that:
No wonder other countries are following suit and advising boards to appoint more females, with the threat of introducing quotas if they fail to do so.

A supply Issue? Those opposed to quotas always point to a shortage of women with the necessary credentials.
I would argue that there's no shortage - just a short-sightedness on the part of those doing the selecting. I would also cite research from Harvard, MIT and Carnegie Business School showing that diversity is more important than expertise when creating the best groups.
And there is a lot of psychological research showing that adding women to a group ensures that
-     To quote Thomas Malone from Carnegie Mellon:
"Having a bunch of smart people in a group doesn't necessarily
make the group smart”.
It’s having different people that makes the group smarter.
Like inviting really different people to the dinner party, the group dynamic gets changed for the better. There’s more growth and development in the discomfort zone.
Yet we all tend to hang around with people who are just like us.
Perhaps it’s time we all invited someone new to the party?

Posted by Karen Pine www.karenpine.com at 11:23

Email ThisBlogThis!Share to TwitterShare to FacebookShare to Pinterest
Labels: boards, do something different, DSD, men and women