A friend recently confessed that she wears high heels all the time because her husband ‘prefers them’. (So if you thought he looked sexier in a horse-hair cod piece, he’d wear one for you would he?) ….
Her hubbie obviously hasn't descended down the same line as Matt Rudd who, in today’s Sunday Times, is bewildered that women wear things that cripple them with blisters and prevent them from running. When it comes to heels there are clearly two types of males, those affected by lordosis and those who aren’t.
Lordosis, I hear you cry, what the Jimmy Choo is that? 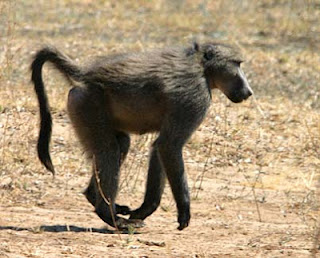 It’s an abnormal forward curvature of the spine. The position that a high heel forces the female form into, with the back arched and the buttocks invitingly tipped up. According to the American Physical Therapy Association, “Walking in high heels forces the back to arch and the chest to thrust forward. Basically, high heels cause the neck and back to hyperextend.”

If you’re thinking this is a load of babboon’s buttocks you’re right, it’s the courting pose of mammals.

Helen, Fisher, author of the Biology of Attraction, says:
"Some women also have a characteristic walk when courting; they arch their backs, thrust out their bosoms, sway their hips, and strut. No wonder many women wear high-heeled shoes. This bizarre Western custom, invented by Catherine de Medici in the 1500s, unnaturally arches the back, tilts the buttocks, and thrusts the chest out into a female come-hither pose. The clomping noise of their spiky heels draws attention too."

Despite a recent finding that high heels denote emotional instability during cognitive appraisal, it seems that evolutionary psychology is alive and well and tripping down the catwalk. Or the high street.

Posted by Karen Pine www.karenpine.com at 17:29 No comments:

I was chatting about fashion psychology yesterday with a friend who works at a very prestigious university, when suddenly her face lit up.
“We’ve just made an appointment,” she said  “and now it’s struck me that we appointed the best dressed candidate.”
Each applicant had to give a presentation to a panel and an audience of peers.

The first candidate, she said, had obviously borrowed his suit. It was at least three sizes too big, the sleeves hung down over his hands and the jacket almost reached his knees.
“It swamped him,” my friend told me, “and now I realise he seemed diminished by it in so many ways, he came across as completely powerless.”

The next candidate, a woman, was smartly dressed except her blouse didn’t quite meet the top of her trousers.
“We were seated right at mid-rift level, the woman was standing up and her bare belly was in our eye-line. I’m afraid it detracted from what she was saying…could we really work with someone who had exposed so much flesh at our first encounter?”

Apparently the third candidate matched the first two on experience and credentials, plus he was also dressed appropriately; good fitting suit, clean shoes, open-necked shirt.
He got the job.

It’s so easy to overlook sartorial turn-offs like these. No one ever mentions them in the rejection letter ("We're very sorry but.... that suit... what were you thinking???")
Anyway the impression is mostly subliminal, exerting its effect unconsciously.

Yet recent research I’ve been involved in is showing just how much these things matter in the job market.
Shabby suits on men spell failure, not success (see earlier blog)
Exposing too much flesh marks a woman out for a low status job and scuppers her chances of reaching the top, as we've reported here previously.

Made it to the top - but the view's not what we expected...


I know I've banged on quite a bit about women on boards, but here's a health warning.
It seems that when women do get to the top many are faced with a glass cliff and left dangling over a dangerous company precipice.
By 2015 Lord Davies wants 25% female representation on boards (yes, one in four – an odd way of construing equality I know). And this year’s figures suggest everything’s on target to achieve it. In the FTSE100 women now account for 15.6% of all directorships, up from 12.5% last year. And although there are still 11 all-male boards, at least that’s down from last year’s staggering 21.

But last week, when talking to Ernst and Young about diversity, a lovely lady there alerted me to the notion of the glass cliff.
Yes, we’ve heard of the glass ceiling – that invisible put impenetrable barrier that hinders female advancement in the workplace -  and even the glass escalator that gives men a smooth ride to the top, but the glass cliff?
It comes from research by Ryan and Haslam at the University of Exeter who, in a systematic study of the performance of FTSE 100 companies before and after appointing a board member, found that companies who appointed a woman were more likely to have experienced consistently poor performance in the months preceding the appointment.

This is both good and bad news. It demonstrates that companies are willing to do something different in times of crisis. In fact there's more recent evidence that  a crisis disrupts traditional stereotypes of what makes a good leader, favouring female attributes over male. But it's a bit like taking over the controls after the car has been wrecked and Ryan and Haslam  include a note of caution in their paper, saying:

Positions on glass cliffs can be seen as being exceedingly dangerous for the women who hold them. Companies that have experienced consistently bad performance are bound to attract attention to themselves and to those on their boards of directors … In this way, compared to men, women who assume leadership offices may be differentially exposed to criticism and in greater danger of being apportioned blame for negative outcomes that were set in train well before they assumed their new roles.

Posted by Karen Pine www.karenpine.com at 16:25 No comments: