Women get a grip on money in 2010, while men get ahead

The recession has certainly made us focus more on money management, but whereas women hope to get a better a grip on their finances in 2010, men are set on making as much as they can.

Men and women differ in their financial resolutions, according to our recent research. Men will be focusing on maximising income, with almost three quarters of them concentrating on making more money in 2010.

Although roughly half the women said making money was a priority for 2010, many more of them said taking charge of their finances was their uppermost goal for the coming year. Our survey revealed:

The fact that more women want to get a grip on their finances is great news. But making money shouldn't only be a male domain, so why not unleash your inner entrepreneur in twenty ten?

Posted by Karen Pine www.karenpine.com at 12:18 No comments: 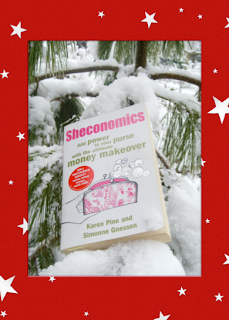 HAPPY CHRISTMAS
AND A
PROSPEROUS
AND SHECONOMICAL
NEW YEAR
FROM
SIMONNE AND KAREN
Posted by Karen Pine www.karenpine.com at 13:30 No comments:

I am typing this from my fairy grotto, twinkling lights draped around my tinselled torso humming along to carols coming from my homemade nativity scene complete with hand-crocheted baby Jesus.....
.... OK, I wish…..actually there’s not even a sprig of holly in the house and it’s too late for me to be ready early for Christmas. In fact folk everywhere are putting their brussels on now to make sure they’re well-stewed for Christmas day (the sprouts not the people)…..so I’ve got some catching up to do.
Posted by Karen Pine www.karenpine.com at 17:47 No comments:

The gift that keeps on giving?

After the Daily Mail ran a story about regifting, featuring my research, today I’ve done lots of radio interviews on this topic.
Regifting is getting more popular and many justify it because it’s green and economical.
I think we’re all passing on unwanted gifts simply because we have too much stuff.
But palming off your tat onto someone else isn’t going to solve the problem (and could lead to disappointed reactions and hurt feelings at Christmas).
My research with Ocado showed that luxury chocolates and champagne are sure winners (you can sneak them into the online grocery order too). Few people would regift those and many would be chuffed to get them.
But if we really don’t know what to buy someone why not give time, offer to cook a meal, babysit and do some gardening?
And instead of regifting those novelty socks or that hideous vase to someone else why not take it to the charity shop? I like the idea that a person might buy it as a gift for someone who then gives it to the charity shop and they sell it again...and so on...recycling with a conscience!
Posted by Karen Pine www.karenpine.com at 17:22 1 comment:

Sheconomics tips for a cool yule

I wasn’t surprised to read that seven out of ten people report money as their main stressor, according to a US survey for the American Psychological Association. And the Christmas holiday is one of the most tense and taxing times for nearly half of all women.
How can you buffer yourself against seasonal stress and guarantee yourself a cool yule? Here are our Sheconomics tips:
· Invest in yourself. Put aside time for some self-pampering, long walks, old movies or a riveting novel. Don’t let other demands encroach on that precious me-time.
· Have realistic expectations. Let go of idealised notions about the festive season with you as wonder-woman in flashing reindeer ear-rings. Enlighten others about what to expect, then no-one’s disappointed.
· Focus on what matters. Know what you want from the holiday season, e.g. giving back, togetherness or reflection. Make it your holiday philosophy and don’t lose that focus.
· Stick to the budget. Set a limit on what you’ll spend on gifts and food. Scale back those sneaky extras/last-minute treats or try home-made instead.
· Rope in others. Whether it’s help with planning, shopping or cooking or the need to talk and get psychological support, don’t be afraid to ask others for hep when you’re feeling overwhelmed.
Got friends who are feeling stressed about finances? A copy of Sheconomics could be the perfect gift!
Posted by Karen Pine www.karenpine.com at 13:11 No comments:

The real COST of Christmas?

Millions of pounds are wasted at Christmas on gifts that people don't need, want or even like. US academic Joel Waldfogel a few years back calculated the 'deadweight loss' of Christmas. He asked people what they would be prepared to pay for the gifts they'd been given. On average it was only about 80% of the true cost to the buyer. The difference in value amounts to millions of wasted dollars.

In his new book Scroogenomics he asks what is the point of gift sets? How many serious golfers would buy themselves those golf-themed knick-knacks, the golf bag wine holder or golfball festooned mug with novelty golf socks? Not many, and I'm sure most dads, uncles and brothers wish they were at least 18-holes away when they open such a gift on Christmas morning.
My own research, carried out recently in association with Ocado, revealed that men are more likely than women to be disappointed with the gifts they get. But women are better at hiding it and try harder to put on a happy face.
I've also analysed the subtle nonverbal signals that leak out when someone opens a naff gift. For more on this check out the info and report on my website.
Posted by Karen Pine www.karenpine.com at 14:08 2 comments: