What a night that was!
Polly tweeted that the evening was ‘mental’. Rose said it was ‘high energy’. Andy gave his book to a stranger he got chatting to on the train. Charlotte travelled all the way to Richmond wearing a badge that said Harlot. Mike said "I've just had the most interesting 45 minutes I've had with a stranger for a long time!"
It was the  launch of Flex: Do Something Different at the Groucho Club on Monday night.
Everyone got into the spirit of Do Something Different. Armed with a pack of Do cards they left their inhibitions at the door, donned their rhyming badges, grabbed a glass of wine and went for it! 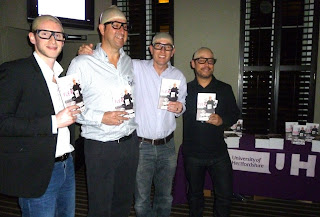 Bald caps and black glasses (in homage to Ben Fletcher) were de rigeur for the Do team on the night. Rhyming badges made guessing people's names good fun (this is Neil above), even if Charlotte did get some funny looks on the tube going home.

One Do was to 'Pat a bald man on the head'. Not difficult with so many baldies floating around. People who didn't pat a slaphead were too busy taking off their shoes and introducing themselves to others in a foreign accent. Or gurning in the Doodio... 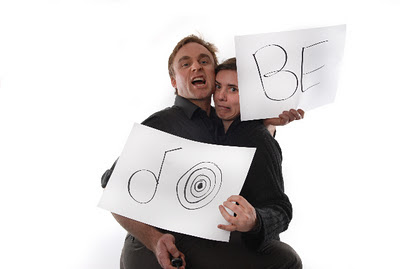 The Doodio was where people could go and take their own crazy photos. Weirdo expressions were optional. 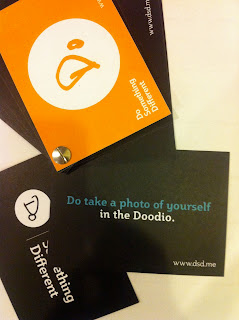 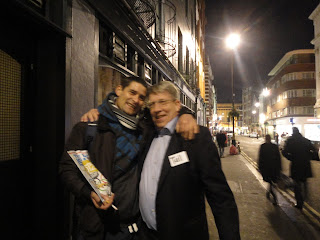 Paul (or Tall as he was here) went out and befriended Darren, a Big Issue seller. He ended up giving him his Do cards, his copy of Flex, and vowing to keep in touch. A heart-warming story from what was a very chilly night, the sort of thing that happens when we talk to the least likely person... 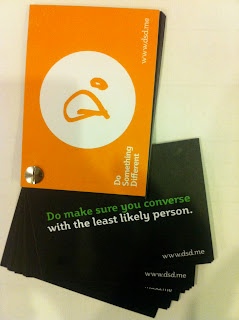 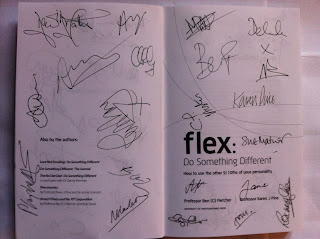 Do Something Different always seems to lead to people doing more for others.
I love that. A beautiful demonstration of this came from a super guy called Mike Clark. Mike bought a signed copy of our book, got everyone at the launch to sign it and then gave it back to Ben and I. What a fabulously karmic goosebumpy kind of gesture.
That's why we're trying to get a million people to Do Something Different. It's behavioural change with a difference. It has to make the world a better place.
Posted by Karen Pine www.karenpine.com at 14:48