Have you heard about the bagel man?


Every morning, Paul F delivered some bagels and a cash box to a company's staff room.
Then he went back later to pick up the money and the leftovers. 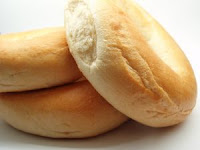 It was an honour-system, people took a bagel and left a dollar, and it worked. Within a few years, he was delivering 700 dozen bagels a week to 140 companies and earning as much as he had ever made as a research analyst. He had left  corporate life behind. And he was happy.

As well as coming up with a great business model Paul F had also - inadvertently – created an elegant economic experiment.

Comparing the takings with the number of bagels taken told him, down to the penny, just how honest people had been. And he noted that the most honest offices were those where people liked their boss and their work! He also got a higher payment rate (over 90%) from smaller offices than larger ones.

Now recent research tells us if he'd stuck a photocopied picture of a pair of eyes onto his cash box, people would have coughed up more.

Psychologists at the Univerity of Newcastle noticed that donations into an honesty box for coffee always fell short of the amount of coffee consumed. So one week they stuck a picture of a pair of eyes on the box. The following week they changed the image to pictures of flowers, then eyes and so on.

People paid nearly three times as much for their drinks when eyes were displayed rather than a flower picture. The figure below shows how the donations fluctuated according to the image displayed. Read their paper here. 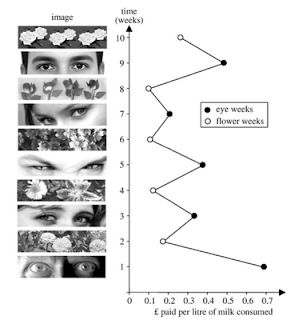 People weren’t actually being watched, of course, but even a pair of photo-copied eyes was enough to prick their conscience. You might like to  see if this works with your children by sticking a pair of eyes onto their money boxes, if they're tempted to raid them a bit too often. Or, if you have a chocolate hob-nob habit, test it on yourself with a pair on the biscuit tin!

Posted by Karen Pine www.karenpine.com at 12:33